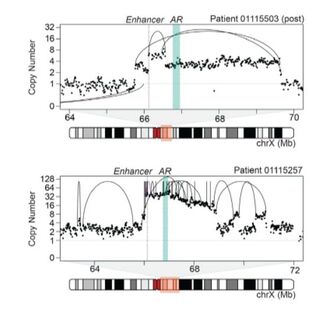 Diverse alterations involving the androgen receptor locus in castration-resistant prostate cancer (from Viswanathan*, Ha*, Hoff* et al. Cell, 2018)
We have several exciting research projects available in the broad areas outlined below. Approaches range from genomics (dry-lab) to functional experimentation (wet-lab) to clinical/translational efforts. Please contact Dr. Viswanathan if you are interested in joining or collaborating with the lab.

​​Overview and Research Motivation
The genomics revolution has given us the power to understand the molecular wiring of cancer cells in unprecedented detail, and has enabled the development of highly effective targeted therapies that rationally perturb specific molecular pathways essential to the cancer cell.  Still, there are many open questions whose answers would significantly improve the resolution at which we understand how cancer develops and progresses. For example:
​(1)  What are the significant drivers of cancer that occur in non-coding or “dark” regions of the genome, and how can these be rationally targeted?
(2)   How does the genome or transcriptome of a cancer cell adapt to pressure from cancer therapies?
(3) How do changes in the cancer genome interact with changes at other levels of gene regulation (epigenetic/transcriptional, RNA processing/modification, RNA splicing) to remodel the malignant transcriptome?

​We are interested in exploring these and other fundamental questions in cancer biology using multidisciplinary and collaborative approaches, with the ultimate goal of laying the pre-clinical foundation for the next generation of targeted therapies that can improve outcomes for cancer patients.

Charting the Molecular Landscape of Genitourinary Cancers
Recent large-scale sequencing efforts have been instrumental in delineating the most significantly mutated cancer genes across many common cancer types. Still, most of these efforts have primarily interrogated coding sequences, which constitute only a small fraction (<2%) of the genome.  Many alterations in noncoding or poorly mappable regions of the cancer genome may hence remain to be discovered.

​MiT/TFE translocation renal cell carcinoma (tRCC): Our laboratory has a special interest in the genetics and biology of tRCC, a rare but highly aggressive subtype of kidney cancer without effective therapies. This cancer is driven by oncogenic gene fusions involving a transcription factor in the MiT/TFE family, usually TFE3 located on chromosome Xp11.2. Through a large-scale genomic effort, we have recently described the molecular and clinical landmarks of tRCC.

Top: Paralog vulnerabilities identified from analysis of genome-scale genetic screening of cancer cell lines by shRNA (top-left) or CRISPR (top-right). Bottom: Transcriptomic changes seen upon MAGOHB knockdown in either a MAGOH-deleted (bottom-left) or MAGOH-replete (bottom-right) genetic context.
Both of the above cancers share the feature of being typified by a dominant genetic driver located on the X chromosome, which has inspired our broader interest in genomic studies of the sex chromosomes. We are also focused on the application of cutting-edge genomic methodologies to define the landscape of other genitourinary cancers with the goal of nominating molecular pathways that can be prioritized for functional studies.

Paralog lethality across cancers: Redundant essentiality between paralog genes may be therapeutically exploited when one of two copies of an essential paralog pair is somatically deleted in cancer. We have recently reported several such paralog pairs, including the example of MAGOHB, a component of the exon-junction complex that proves essential to maintaining RNA surveillance when its paralog, MAGOH, is somatically deleted. By performing genome-scale genetic screening in models of genitourinary cancer, we aim to uncover novel and therapeutically tractable molecular targets that can inspire the development of the next-generation of therapies for these cancers. 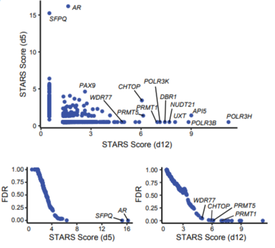 We are applying similar approaches to systematically dissect the vulnerabilities of other genitourinary cancers.